Veronica Mars – how do I love thee? Let me count the ways 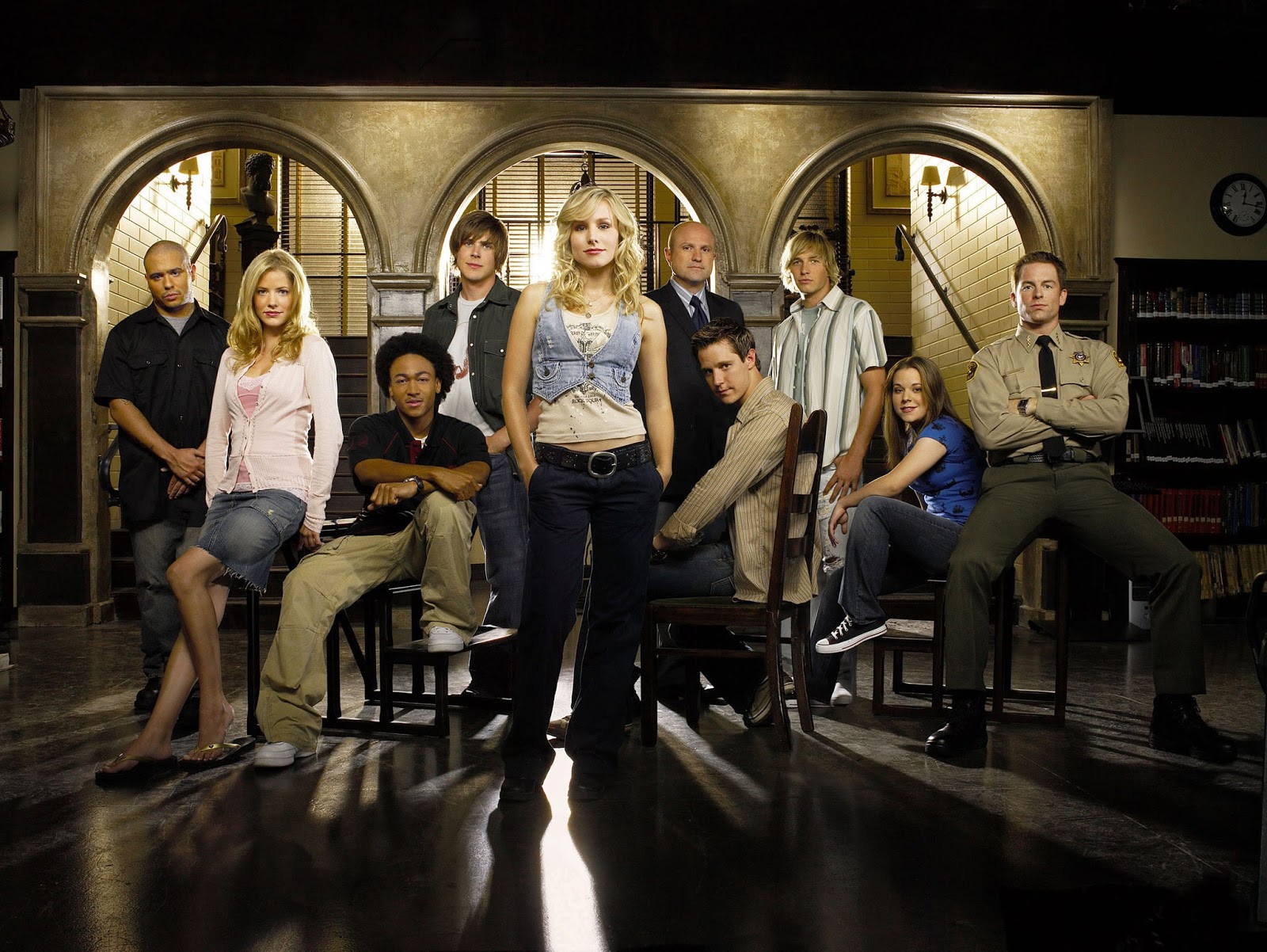 Today, March 15 (NZST) sees the official release of the much-anticipated, partially Kickstarter-funded Veronica Mars movie on VOD and in select theatres in Canada, the UK and the US.  Fans in the antipodes are waiting to see if writer/producer/director Rob Thomas and studio Warner Bros will take a theatre deal in this neck of the woods or whether we'll have to be satisfied with Amazon and iTunes.

Late to the party as always, I didn’t discover the year-old Kickstarter campaign until four weeks ago, but I’ve had my nose pressed against the glass ever since. 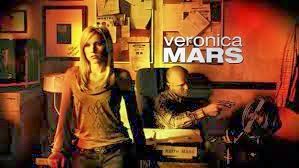 If you’ve missed the phenomenon that is Veronica Mars, it was originally a genre-bending noir-style high school TV series with a witty, super-smart female protagonist.  The show ran for three seasons in the 2000s and was cancelled mid-storyline in 2007 with moderate ratings.  After years of (rabid) fan campaigns and constant requests to Rob Thomas and VM’s titular star Kristen Bell, a Veronica Mars feature film has been fan-funded and made.  Some 91,500 fans (myself excluded, but only because I missed the deadline by, like, 12 months) have contributed hard cash to see their favourite characters on screen once more.

In the series, Veronica Mars is the daughter of a disgraced small-town Sheriff turned private eye. Cast out from her rich-kid clique after her father accused a powerful man of murder, she is resolutely bad-ass. Bringing wealthy or privileged evil-doers to justice while refusing to give a crap about what anyone thinks is her thematic anchor.

The Veronica Mars movie picks up the threads of the series 10 years down the track.  Veronica has just graduated law school in New York.  She recently started dating Stosh Piznarski, an old boyfriend from college and is ready to work for the man.  That is until old flame Logan Echolls is accused of murder and she returns home to help.  Happily her 10-year high-school reunion is also on, allowing for all manner of series regulars, including besties Wallace and Mac to make an appearance in the film without too much narrative strain.

The volume of Veronica Mars fans, their longevity and their willingness to provide money upfront should be of paramount interest to movie execs.  What exactly is it that makes this story-world so ‘sticky’?

Objectively speaking, most of the cinema-quality US cable shows we’re currently enjoying were still a gloaming twinkle in 2004 when Veronica Mars premiered.  This is definitely small-screen fare.  In DVD commentary on season three Rob Thomas is sweetly forthcoming about budgetary constraints, writing mistakes and the family-like on-set atmos.  There is a small-team, organic feel to his commentary and to the show as a whole.  Sets tend to lack windows.  Location work is limited in scope.  Plots are not always fully realised or are slightly OTT.  Scenes are quite static.  Lighting is simpler than we have become accustomed to in the universe of HBO super-shows.

But this to me is kind of charming.  And in any case what I, and many other fans love is something else, or, in fact, several things.

Thomas started his working life as a journalism teacher and apparently quickly became part of the wallpaper. Privy to his female students' personal conversations he realised the greatest ‘super-power’ he could give a teen heroine would be to not care what anyone thinks.  That probably created an unintended appeal – the outsider who doesn't give a toss speaks volumes to the dispossessed, regardless of their gender.  In the wake of the global financial crisis any outsider triumph is likely to be wildly resonant – and we want more of it, please.

Kristen Bell, incredibly well-cast as Veronica, has commented on her character’s complexity.  She uses verbal repartee and sheer brains to outwit the bad guys, and when she kicks ass it’s not in a physical way.  In other words, her smarts and strengths are matched by a vulnerability which is relatable.  As audience, we are still presented with a very limited number of complex, interesting, three-dimensional female characters on screens of any size.  Veronica Mars’ thousands of fans are likely testimony to the fact that audiences are hungry for this material – so hungry a lot of us are willing to pay for it upfront.

Since cancellation of Veronica Mars, films and shows carried by complex female characters are attracting a bankably large audience.  Running entirely off the top of my head I’d guess The Good Wife, Bridesmaids and Girls enjoy ratings success driven by a healthy male fan-base.  Massive HBO hits Game ofThrones and True Blood are ensembles with (at times) questionable gender politics, but their female characters are feisty, witty, bossy, concerned with power – worlds away from preoccupation with social and domestic life.  A male friend personally prefers Arya’s story-arc above all others in Game of Thrones.  This lends (anecdotal) support to the idea that, in fact, the demand for interesting female characters is greater than supply.

The class issues Veronica Mars addresses are also highly topical in the wake of the GFC.   The fictional town of Neptune where Veronica Mars is set contains the super-rich, a disenfranchised middle class and, well, bikers.  The downfall of the middle-class has only become more topical since VM's demise as a series.  It was about then that the credit crunch started, thousands lost their homes to sub-prime mortgages and it was generally revealed that enormous private corporations had been quietly ripping regular folks off, simply because they could.  Watching Veronica Mars exposing rich white guys as horrible, dishonest people and actively bringing them to justice episode after episode must have been a balm to the soul for a significant proportion of audience members.  I enjoyed it quite a lot myself.

In the way it addresses the power and politics of high school, Veronica Mars treats shitty teachers like the power-wielding evil-doers they are.  And even though I graduated decades ago, I still take unalloyed pleasure in seeing under-dog students come out on top.  I also love that, narratively speaking, Veronica's sexual activities, bad attitudes and even illegal behaviour go completely unpunished.  She does the deed with her boyfriend in his hotel room, makes her best friend steal student files, cuts an additional set of keys to the principal’s office, appropriates a ladies toilet as her own office, impersonates, cons and dupes - and generally gets away with everything.

There is also a sort of fantasy nostalgia factor which is very appealing.  Veronica Mars’ dystopic universe incarnates high school the way the audience maybe wish it could have been.  A sympathetic Dad who treats his daughter like an adult and loves her like crazy while simultaneously allowing her to run amok.  A main character who gets fantastic grades, mostly without trying, has seriously good skin and jeans, a nearly new car and interesting, loyal friends.  Veronica also has clear-cut problems to which she is able to find a solution, dignity in her sexual relationships and certainty about her values.  If only actual adolescence could have had that much clarity.

Indeed, Veronica is always the smartest person in the room.  She’s ready with a cutting riposte to every put-down.  There is no grey in her universe.  If someone does wrong by her she has no compunction, but she seldom judges people ahead of their behaviour.  Rather than shunning social outcasts she befriends them and her misfit collection of sidekicks always come through.  In other words, for many of us watching from the sidelines, she’s the girl we wish we could've been.

And I suppose, for many of the male admirers of Veronica’s special brand of feist, she’s the girl we wish we could have.

One final element worth noting in terms of the Veronica Mars’ series on-going fan appeal is the way Rob Thomas left the story at the end of season three.  Given a choice to tie things up by the commissioning TV channel, he elected to leave us with a cliff-hanger.  Sometimes there’s no greater pull to see more of something than an overwhelming desire to know what happens next.

Counting down the final hours to the official release, I’m mostly thinking (in a very sleepy way) about the fact that it’s personally important to me that something like Veronica Mars exists.  In a universe of stories in which women are decorative plot-devices or obsessed with domestic, social or sexual minutiae, she fills the screen, centre of the moral universe, making the story happen.  She never leaves well enough alone, refusing to be silenced, sidelined or removed from centre-stage.  And instead of being punished or put in her place, she flourishes.
I suppose the moral of the story for Kickstarter campaigners, filmmakers and studios is - give audiences more three-dimensional girl heroes, and keep it coming.  We will reward you.
Email Post