Avoiding the flux in India 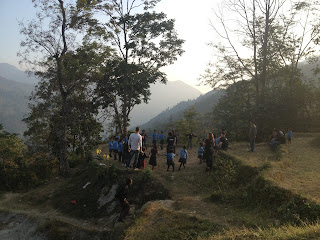 I was recently in India (Kalimpong, West Bengal no less) directing a couple of promotional videos for a most admirable NGO.  India is such a head-trip that I despair of being able to explain the experience and various frustrated family members, expecting a well-embroidered tale over Christmas drinks, can attest to this.  However, what I can reveal - of particular interest for those of you planning on hitting India - are my personal tips for avoiding gastro-intestinal and respiratory tract infections while there.  If the list seems like overkill that's probably because it is, but I had a job to do and a schedule to do it on, so when it came to risk management, I did not stint.  Everything is based on trials from earlier trips and what I know of medical principles (as a nosy layperson) but it did work flawlessly the one time I had a chance to deploy it.  Adopt at your own risk!

1) BLIS travel guard – stops you getting a respiratory tract infection from being on the plane.

2) No jetlag homeopathic anti-jetlag pills. They stop the “restless leg” feeling I get on economy-class long haul and make it easier to rest.  Obviously, when it comes to any international travel, rest makes everything work better.  I got mine at Auckland airport and I've also seen them at a mall pharmacy, also in Auckland, but there is extensive 'where to buy' information on their website if you're based somewhere else, including internationally.  Incidentally - these don't stop actual jet lag, but they do make a long haul or medium haul flight more comfortable.

4) Multivitamins – for me they reduce the impact of jetlag and fatigue and appear to give my immunity a boost.  The ones I'm currently taking are Red Seal Women's Multi for the principle reason that these are super-cheap at Countdown.  But I imagine any multivit would work just as well.

5) Probiotics – theoretically these populate your digestive tract with healthy bacteria, potentially making it harder for the bad bugs to get in. There is some evidence to suggest that the right probiotics reduce anxiety (see here for information on a study to support this bizarre assertion - I'm not just making it up) which is an advantage if you're working on something stressful. Healtheries Probiotica from the supermarket were great for me.  The most important thing is to make sure you get a brand that doesn't need to be refrigerated.

NB: This is not to do with gastro-intestinal or upper-respiratory tract infections but more serious diseases deserve a mention.  As Kalimpong is near the Himalayas and it was winter-time when I was there, I opted not to take anti-malarials.  If I had been in Goa or traveling in summer I would have taken doxycycline, which I find tolerable.  Insect repellent is non-negotiable no matter what.  And obviously get all the recommended immunisations - getting hepatitis will typically top most gastro-intestinal issues and tends to last a whole lot longer.

6) Drink as much water as possible on the plane to stop your mucus membranes from drying out – which makes respiratory tract infections less likely.  Buy a bottle of water after you get through security and get it refilled by the flight attendants during the flight.  I always have a couple of alcoholic drinks - an aperitif and wine with dinner - because it's part of the fun of flying, but it's better to avoid booze altogether if you feel up to it.

7) Once in India, stay hydrated but ONLY with bottled water from a vendor that you trust.  Even in the best hotels all the tap water should be considered wonderfully bioactive.  Hotels usually provide bottled water in your room and this is fine. I usually carry a bottle of water with me during the day so I always have something handy - a friend from India told me that street vendors sometimes refill water bottles and super-glue the tops to make it seem as if they're sealed.  Not something I wanted to test.

8) ALWAYS use bottled water when brushing your teeth and washing your face.  It seems like over-kill but it's an easy way to avoid sucking in something dodgy.  I know people who swear by the concept of brushing your teeth in the local water to give your body a chance to develop some immunity, but when you're on a short trip or a job and you can't afford any downtime it's not worth it.  Also - I'm pretty sure it's not possible to develop an immunity to giardia.

9) In the shower, keep your mouth closed and don’t lick your lips.  No gargling!

10) Hand sanitiser – use this after washing your hands at the toilet (dry them first) and any time you feel you need it.  If you’re eating with your hands use it before meals.  I used Purell 15 ml bottles - I took about five for two weeks, gave two away and got through about 3. I also took disinfectant towelettes as well but those are really better for those moments when you're not able to shower...

11) Be picky about where you eat - one of the people I was traveling with got sick at a dodgy restaurant and she thinks it was the water used on the glassware.  (This particular person is a New Zealand-based Indian and she swears by going to an Indian doctor if you get sick there as they're used to diagnosing the problem and have all the right drugs to hand. Local pharmaceuticals are cheap and reliable for the most part, but I've seen mixed results with doctors.  Best to get a recommendation before taking this route).

12) Eat nothing raw – no salads, no pickles , no nothing – not even in a fancy hotel. Everything has to be hot and freshly cooked.  This is to avoid contamination from food-preparers not washing their hands, especially after going to the toilet, and from the water.  I had no problems with fruit you can peel (oranges, bananas) but any fruit where you eat the skin should be avoided - because it will be probably have been washed before you get it.

13) Don’t bring your hands to your face if you can avoid it. Lots of infections are passed from noses, mouths and bums to hands, then to surfaces and from there to other people’s hands, noses and mouths.  Delish.

Other notes:
In most places showing arm-tops and any part of your leg is considered risque and will cause people to stare.   After one dubious afternoon walk in Delhi I learned this the hard way.  In terms of arms and legs, India is more conservative than the Pacific.

The regime above assumes that your sleep patterns will be messed up but it goes without saying that everything works better with adequate rest which can take a bit of discipline.  I found the time change going from New Zealand to India easier than when coming back.   You tend to sleep when it gets dark and then wake up really early which I found great for getting stuff done.

Sarah said…
This is probably really good advice, but I have to confess that in my three trips to India, the only one of these I have followed is the mosquito repellent.
I may just be lucky, but I eat street food and drink tap water, or whatever water is in the pitcher on the table in any restaurant.
The only time I got sick was from eating hot butter chicken in a 4 star restaurant :-)
12:59 am, January 08, 2013

Lyn said…
Yup - you're not the only person I know who has a story like that. For me it's all about risk management - since I was working on a schedule I needed to be well enough to perform the whole time and I was - didn't even have a cold which I'm prone to when traveling. But maybe I should add "don't choose chicken dishes" to the list. When it comes to food poisoning, the quality of a hotel/restaurant is no guarantee - a work colleague swears by street food because you can see it being prepared and you know how fresh it is. Hotels do normally get reliable bottled water though. I've heard horror stories from drinking tap water, but I would imagine it depends a lot on where you are in India. It's really all about playing the odds, because there are so many variables - your own immunity, overall health, time of year, how good the water-supply is, how well kitchen staff are trained etc etc. My list is all about swinging the odds in the traveler's favour as much as possible. If I was staying in India for a longer period and some down time was possible, I would be much more adventurous and much less disciplined!
9:48 am, January 08, 2013