For your possible reading pleasure a quick note from various Labour gatherings this evening...

11.24pm Goff does a stand-up interview outside the war memorial door...applause breaks out in ragged patches. And the departure - security following in a matched sedan. The circus is getting ready to leave town and this time so am I.

11.08pm political reporter from one of the networks arrives, lprent is agitating to leave, but hooked into more chat about running thestandard.org.nz with more party insiders.

11.03pm lprent is discussing how to get better mobilisation of voters with a party insider...David Cunliffe has left the building, and now so have I. The crush eventually forced the issue. More chat about mobilisation on the veranda. Now I can see the giant sports reporting truck and lights in the carpark...

11.00pm various pundits agree it's not a great result, but more people are still trickling in from outside anyhow and wine in plastic cups awaits. I've been noticing tv1's female camera operator - go girl. Camera department chicks are not as common as you might imagine.

10.56pm - the circus is starting to leave town - camera operators cluster but some of the lights are off. Someone shouts out that Christchurch Central is a tie...

10.52pm Phil - Bloodied but holding true to our values...hoping for a future where we keep our assets. Where National have no mandate for change, such as to sell assets, we will fight and fight.

10.48pm Michael's congratulations to Phil, to the electorate support and the gutsy-est campaign Labour campaign ever.

10.43pm - lights, camera - Phil Goff in the house...Michael Wood on stage and drums to welcome him in.

10.40pm - David Shearer is doing the rounds, showing the team colours...People are trickling in from the surrounding electorates. 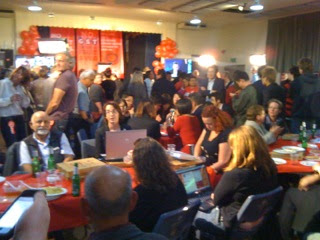 10.32pm Standing room only at Mt Roskill...at least one organiser commented that they didn't expect so much media in the room - even China TV is here, plus live cameras from the networks and all the rest.

10.08pm - resignation over John Banks taking Epsom for Act. Someone comments that the margin between National and Act makes it a massive loss for Act, in relative terms of course.

10.05pm The crowd is thinning slightly - probably people decamping to Mt Roskill. Those left are watching a triumphal Russell Norman on the projector - a third party gets over 10% for the first time in New Zealand's history.

9.55pm Mt Albert - bunting styles and red balloons, a New Zealand flag on the wall and tv3 on the main projector. The crowd is classic 70s liberals, the core of Helen's old electorate still in evidence and the debate is sharp. The pundit position on Auckland Central now saying Nikki will take it with a current margin of 600 and 75% of votes in.

9.29pm Auckland Central - small section of the room have roused to the idea that NZ first could be going in. "Let John Key's nightmare begin" is the rallying cry.

9.26pm First stop - Auckland Central, the home seat of Jacinta Arden...the mood is chill, hopeful. Well-heeled hipster liberals plus a slightly older set, red wine drinkers and a wood fire on Ponsonby Road. Certain pundits are predicting a win to Labour for Central given Jacinta and Nikki are neck and neck. There is close attention to the tv1 polls and the Elections website - live updates. A cheer for David Shearer pushing ahead in Mt Albert.
Email Post
Labels: Political

Anonymous said…
I thought I'd post here having watched the lection from stateside. I'm a little nervous given your discussion of Vanity Fair's "well balanced sentences." Have you read "How to lose friends"....? Book by an English writer working at Vanity Fair.

ACT - the weirdest political coup ever. Like the piggy with the house made of sticks assassinating the piggy made of straw, and moving into his house with the piggy whose house was made of sticks, and then killing himself, and leaving the whole lot to the wolf.

Good for the Greens, not so good for Labour. Commiserations

National predictable, Maori vote seems to be fractured yet again. But then, so is the Pakeha etc...

Overall it seemed largely as predicted, and largely in line with National governments in NZ from time immemorial - their second terms are won without much difficulty.

My wife and I stayed up til 2am watching it til it was inevitable (and too tiring).


Got to see the local elections here, which are well suppported and very good. It's when things get national that it gets awful.

Lyn said…
Is that you Monsieur Noir? Nice of you to stop by if so, especially since you don't facebook. I think you need to work on the piggies - I wanted to know more but there was a core tautology at work which began to twist my brain apart. Much like Act itself really. BTW, you are the first person to comment on this iteration of the blog...tell all your friends to stop by. Mwah!
12:23 pm, November 27, 2011

Anonymous said…
Yea, tis I. I didn't want to know more about the piggies, but one little piggy somehow made it in. Sigh...

I'll say that from america we don't know how lucky New zealanders are with Government provided healhcare and public services. It isn't any cheaper provided by the market, and it's a lot more complicated. Roll on 2014.
4:47 am, November 29, 2011