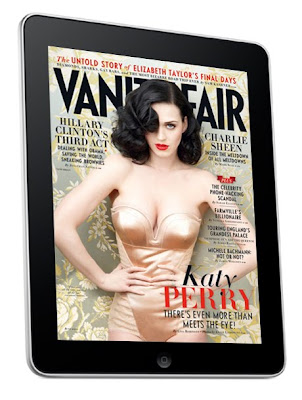 It's so seldom that I have the brain-space to fuel an inclination to write these days. The reason I'm doing so today is all thanks to Vanity Fair via my iPad. Which is not to make this rarest of posts into some kind of product endorsement, but is a simple statement of truth. The iPad makes it easier to get stuff, and I just (finally) updated to iOS5 which has gifted or cursed me with the native app Newsstand, featuring none other than Vanity Fair. So I can get the air-freight version at less than half price via the app-store and several as-yet unread back-issues. (I was hoping for FREE but frankly if content is of value then giving value in return is only logical. No one hopes that's true more than an independent documentary producer. Trust me.)

The general flavour of Vanity Fair is the same on the screen as it is on the page, and it's really this which has inspired me to put finger to key. The political gossip and alcohol-soaked gonzo celebrity stories give the magazine its name but the quality of the writing makes it impossible to ignore how brainy and well-researched the finished products generally are. I feel smarter after reading. Those exquisitely balanced sentences and paragraphs also smack of a quantity and quality of sub-editing seldom seen anywhere any more and certainly not in New Zealand's crumbly MSM. Some paucity of market-size or imagination, but I don't have the time to research which.

So - apropros of my second sentence above - good writing makes me remember the power of prose and the importance of having a good hard think about things and committing that to paper or screen whenever possible. It's broadly what got me started here and probably what will keep me going....
Email Post