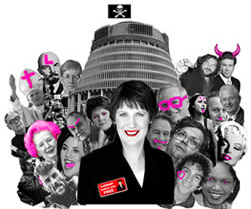 Last night I went to see On the Conditions and Possibilities of Helen Clark Taking me as her Young Lover, a powerpoint presentation delivered with mouth-frothing intensity by a character called Richard Meros. Given the enthusiastic reviews I'd read it was about what I'd expected - less than hoped for but still quite good. Meros' tweedy pants were cliched but charming, as were his font choices, and AndrewE would have been impressed by his reliance on image and animation over text throughout most of the powerpoint slides. Never have pie graphs been so menacing or Condy Rice so positively portrayed.

Apart from an obvious bias towards Helen Clark, the "lecture" didn't engage much in partisan politics - Rogernomics, female prime ministers and the change in New Zealand's social landscape wrought by both were presented with wit of the funny variety and the Jane Austen kind, which is to say that the presentation was, at least in many parts, an intelligent commentary on New Zealand's current social and political landscape heading into the 2008 election, coupled with sexual innuendo and personal details that made one want to cross one's legs. The delivery was, as previously indicated, delivered in a uniformly fortissimo fashion, but this suited the character and his purported carnal intentions towards Aunty Helen uncannily well. Meros did *not* break stride at any point in the proceedings.

In short - anyone who reads or writes a polly blog, enjoys tweed, makes use of powerpoint, is part of a high-school debating team or parliament, or who is, in fact, Helen Clark, should make a date to see On the Conditions and Possibilities of Helen Clark Taking Me as her Young Lover. It is not devoid of charm and may still be playing at the Classic Basement here in Auckland, although some reports indicate it finished tonight.

Julie said…
You are freaking me out Lyn! I was there too!!

I took the Mr as his surprise birthday present and we noticed quite a few Nats in the audience, including an Auckland MP. At this point, before it began, the Mr turned to me and asked me if I had read any reviews. I admitted I had not. We both became somewhat apprehensive that perhaps we were the only people in the audience who were card-carrying members of the Clark-led party (on the Mr's part) and/or had ever received a peck on the cheek from Messr Goff (on my part). At least the first few laughs from our quarter were ones of relief.

Lyn said…
Well how about that!! Not surprising though given the circles that we're both blogging in..

My only question - were you there on Friday or Saturday night? I was there on Friday (posting the blog entry late on Saturday) and didn't observe an open fly. Maybe I just wasn't looking hard enough??? If we were at different performances then I'd suggest it wasn't intentional. But it may as well have been. Hilarious. If only Helen had been there to observe the goods.....
1:52 pm, May 11, 2008

Julie said…
Ah ok, we were there on Sat night. Sorry for the confusion. I thought there might have been some deliberation on the actor's part as the odd flash of his undies indicated he was wearing bright red ones. Mayhap it was part of a dare or something?

Also this actor was also one of the main parts (Brian Sinclair) in The Hollow Men at the Maidment, which I saw last month. Rather good at both I thought.
8:18 pm, May 11, 2008

Anonymous said…
oh i was staring at his crotch the whole night too. noticed straight away that his fly was half down. was quite impressed that it just stayed down that small amount for the whole performance, just a peep, as if to say, these pants, they do come off.

kind of added to his whole sense of bridled geek lust.

also notable was although his pants were tight, he had no discernible bulge.

Lyn said…
Well - next time I'll have to observe the crotch part more closely. l_d, honestly - I had no idea. Although now that you mention it I do recall a very tidy frontage.

I'm sad to have missed the Hollow Men. I saw one of the actors from this play in the audience on Friday (my flatmate is an actor and so I'm meeting more of them all the time), so it doesn't surprise me to hear there's a connection. Arthur Meek seems to be the thinking women's political crumpet, really. He's quite toothsome both mentally and physically.
11:52 pm, May 11, 2008