And now for something completely different

I've been thinking about the idea of how gender affects the construction of self-identity for quite a while. I even enrolled in a Masters looking at why educated women feel they're not mothers in their twenties, and that was back in 1999. As a project of mine this theme typically lies fallow for a time and then surfaces again. In this vein I've recently been thinking about female filmmakers and an idea I have that they tend to concern themselves with relationship and the process of relationship (externality) and self (internality) within filmic narratives, possibly in a way that is less common among male filmmakers. I should qualify this by saying that I can't possibly support an argument that reduces men or women to one thing. I also think it would be ridiculous to suggest that just because one is a female filmmaker one can be predicted to use a particular narrative trope. But I keep seeing a an attention to relationship in some of my favourite films, and I'm struck both by the fact that they're my favourites, and also by the fact that they're often directed by women. So in this post I'm exploring what I see as some similarities between the films of three female directors and musing on whether their femaleness has something to do with what captures their creative interest.

Some things to think about: I'm going to apply the concept of "auteur" on the grounds that a director, arguably especially in an indie situation which doesn't involve a studio, is the final authority for the inclusion or exclusion of elements in a film. This is a vexed and mediated process, and filmmaking is always a group effort, but I'm going to put in a vote for the ultimate responsibility of the director for delivery of something that fulfills their vision, or, at the very least isn't a piece of crap. An ability to make things that aren't a piece of crap is usually why directors get hired, and that does reflect the level of control they are expected and obligated to exert over the finished piece.

Also, I'm not putting in an argument about "feminist" filmmakers. I'm not arguing that the directors I'm thinking of - Jane Campion, Catherine Hardwicke, Lisa Cholodenko are feminists, or trying to be. I'm exploring the idea that, as women, they concern themselves with similar themes, at least in terms of the films that I'm thinking of - The Piano, Thirteen, and Laurel Canyon. Supporting this thesis is the fact that all of the films being discussed were also written by their directors. This is a clear signal that the director had a high level of investment in and control of the themes and ideas presented in each film. 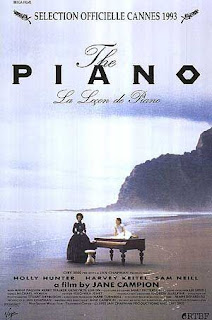 In each of these films, the main character is involved in one or more significant relationships at the beginning of the film, and these fuel the narrative and the experiences of the protagonist, and must be reconciled in some way. In the case of The Piano, main character Ada is locked into a marriage with a man she has never met, but is also tightly bound to her illegitimate daughter, and engages in a sexual liaison with a man outside the marriage. The nexus of these relationships produces the climax of the film, and it is Ada's desire to explore their boundaries and push against the symbolic order expressed by them that generates the plot. Campion contains Ada within a conventional universe by the end of the film by allowing her to marry her lover, but maintains an attention to the inner workings and destructive quality of the family and the relationships within it.

Laurel Canyon asks its driven, reactionarily conservative male protagonist Sam to negotiate his own self-identity in relation to his bohemian record-producer mother Jane, and thus decide if he will stay with his girlfriend Alex or follow his heart and be with the woman he has fallen in love with, Sara. At the same time Alex is exploring the boundaries of her relationship with Sam when she gets involved with Jane's latest project and is gradually drawn towards a sexual exploration involving Jane and Jane's rock-star boyfriend Ian.

Thirteen explores the destructive qualities of the relationship between two teenage girls, Tracey and Evie, focusing on the changes experienced by Tracey who was a previously responsible girl-child. Family relationships for both girls are set up as major motivating factors for bad behaviour.

These films seem like an obvious contrast to the typical Hollywood construction where the hero/ine is rewarded with a relationship or sexual access to the object of their affections at the end of the film. There is significant attention to the way that family relationships create personality and identity. Relationships between people determine and drive the plot of each film, and relationship problems and the resolution or confrontation of these problems are ultimately the conclusion of each film (I could go into more detail here, but to see if you agree with this one-over lightly conclusion, you should probably watch the films in question yourself).

Interestingly from a feminist perspective, boundaries of acceptable female behaviour within relationships are transgressed but with arguably less judgement or containment than is often the case in Hollywood cinema. Ada is unfaithful in her marriage and loses a finger but escapes to marry her lover and have a happy, erotically-charged marriage. Sam's ultimate reconciliation with his flakey yet brilliant mom and the choice he must make between his filandering girlfriend and the woman he has fallen in love with force his character and the audience to consider how reasonable the boundaries set by society on women's behaviour really are. Tracey's boundary-pushing activities (drugs, sex, promiscuous behaviour) are portrayed as a complex process of working out things Tracey has been confronted with in her own family relationships, even though the film leaves us with little doubt about their ultimate destructive qualities. Resolution comes with realisation rather than a simple containment of Tracey back into a "stable" family situation and her forced acceptance of behavioural norms. In each film, each woman ultimately exerts an independence of spirit and intent - she exerts her self within a relationship and in response to it - and is rewarded for it.

So - in conclusion - my three female (but not necessarily feminist) auteur directors give significantly more attention to women's transgressive self-determination within relationships than a "typical" studio film, and relationships and conflict within and between them drive the plots of the films discussed.

To determine if an attention to relationship and the determination of self is something that female auteurs regularly give attention to I'd have to spend more time watching movies than I currently have available. This is just an observation based on three of my favourite films and their directors. Any other views, comments on the (in)accuracy of my close-reading, or further evidence for or against my proposition would be most welcome.
Email Post
Labels: Film Gender